TL: Heads up, this chapter made me super hungry. So make sure you either read this with a full stomach or that you have snacks nearby~ Enjoy

After receiving my textbooks, I decided to go outside the academy and stop by a cafe that had recently opened in the capital.

The cafe has a reputation for its delicious sweets.

I invited Tria and Angel to join us, but they both had prior engagements and apologized saying they couldn’t make it today. We promised to make plans for the next time and parted ways at the school.

That’s why I’m now walking to the cafe with Chris and Lyon, who was in his boy form.

“Why are you in your human form, Fluffy-kun? I believe this is a pet-friendly store.”

“Don’t treat me as a pet. I just am because it’s easier to eat in human form.”

I laughed at the exchange between Chris and Leon and rechecked the map for directions to the cafe.

“We should be able to see it in a little while….Oh! Is that it?”

“That character is in Hinoshima. I wonder if the owner is a person from Hinoshima?”

The entrance to the store was adorned with a cloth similar to that of Tojurou-san’s and Kikuno-sama’s kimonos.

“Isn’t this called a ‘noren’ or something like that?”

(TL Note: Noren can also be translated to ‘goodwill’, but this word made more sense context-wise.”

It was my first time seeing the real thing in person, but Kikuno had told me that the store entrances in Hinoshima are adorned with a cloth called Noren.

A lady said, coming out of the store speaking in Hinoshima. The lady had black hair and eyes. Her long black hair was tied back in a single knot. She had a lovely face and possessed a friendly aura about her.

“Hey! Ayano! You’re being rude to our customers.”

A man’s voice echoed from the back of the store. He also spoke in the Hinoshima language.

“Um, excuse me, but do you happen to know Kujo Kasumi Kikuno-sama?”

I asked the lady speaking in Hinoshima.

“Eh! Are you young ladies acquainted with Kikunon?”

“Once again, I’m not ‘Nanase’! My name is Yakumo Ayano. I’m a childhood friend of Hikoto and Kikunon….Ah! Hikoshiro and Kikuno.”

(TL: Her first name is Ayano, but they say last names first in Japan)

As an acquaintance of Kikuno-sama and Hikoshirou, we were escorted to a private room in the back and received a self-introduction from Ayano-san.

Just as I was about to say my name, Ayano stopped me.

“Wait! Let me guess your name. I’ve heard about you from Kikunon. The blond young lady is Princess Chris. The princess of this country.”

Chris looked down and giggled. Perhaps Tojurou-san’s nickname, ‘Hiko’, made her laugh.

“And the silver-haired young lady is Yurie. A relative of Hiko’s.”

Chris burst out laughing, unable to stand it.

I poked Chris, who was sitting next to me, with my elbow.

“It’s okay. At you young ladies’ age, it’s normal to laugh at the drop of a hat.”

In Hinoshima, the expression  “the age at which laughing at the drop of a hat occurs” refers to adolescents.

“And the boy there is Leon. His true identity is a ‘Nekomata’ right?”

Leon spits out the green tea he was drinking.

“Who’s a nekomata? Don’t mix me up with a youkai!”

Ayano-san said laughing while waving her hand as Leon growled.

It was an unfamiliar term.

“It’s an ayakashi (monster). Something like the undead monster we have here.”

I see. Undead monsters are immortal. They’re similar in that respect. Leon is a god, so he’s immortal. Eh? I thought so, but I’ve never actually asked.

“Even so, Kikuno-sama seems to have told you a great deal about us?”

“Yes, Princess Chris. She said you’ve been very helpful to her in this country.”

Chris is fine. And I disagree. It is us who have been taken care of by Kikuno-sama.”

That’s right. Kikuno-sama took care of us very much. And I’m still indebted to her.

Currently, Kikuno-sama is working as an ambassador at the newly completed embassy in Hinoshima.

However, she sometimes visits us at the townhouse to check on the plants we are growing in the greenhouse. Kikuno-sama, the former earth goddess of this country, is very kind to Chris and me, who possess an earth attribute magic power.

A voice called out from the door of the private room saying, “Excuse me”. It was the same voice I heard from the back.

The door opened and a man appeared. He had the same black hair and eyes typical of the Hinoshima people. And his hair was cropped short.

“My name is Yakumo Sotaro. I’m the husband of Ayano, and a childhood friend of Hikoshirou and Kikuno, who are still close friends.”

He had a fearless and neat face, as strong as Tojurou’s. He was also as tall as Tojurou-san.

“My wife was rude to you earlier. As an apology, I will treat you to as many Hinoshima sweet as you like.”

Ayano’s husband? I had heard from Tojruou-san the other day that two of his childhood friends had gotten married, but it was them?

“No way. She just called me a ‘nekomata’. Bring the entire menu. Of course, it’ll be your responsibility.”

Leon, who had been sulking until then, pointed at Ayano-san and protested.

I gave a warning to Leon, who was lounging on the other side of the room.

“I’m sorry about that. This guy is lacking in femininity.”

“Your husband seems to know what he’s talking about. Hmmm? Are you a blacksmith?”

“Do you recognize me? I run a blacksmith shop next to this teahouse. If you need to take care of your weapons or buy a new one, please come visit my store.”

Sotaro-san advertised his store and then left the room, pulling Ayano with him.

“Seriously! Leon’s such a glutton! It’s called a nekomata, so it must be a cat, right? Aren’t they the same thing?”

“Not even close! You see. A nekomata is an old cat that turns into a malevolent monster. It is the exact opposite of me!”

Leon said as he turned his back on me. He is oddly stubborn for a god.

“By the way, Fluffy-kun. How did you know Sotaro was a blacksmith?”

“He had a lot of blisters on his hands. And he smelled of steel, so I decided to test him.”

Leon’s observations are quite impressive. I thought he had used his God’s eye to do the appraisal.

I asked Chris what was bothering me.

“Hey, Chris. Did you see Charlotte when you were greeting the students on the stage?”

“I looked over the faces of the students from the stage, but… I didn’t see her.”

Chris has an incredibly good memory, and once she sees something, she never forgets it.

She looked at the students in the auditorium as she spoke to the new student body assembly. I knew she was looking for Charlotte, as she was surveying the whole place.

In my previous life, I’m sure she enrolled in the Magic Academy at the age of thirteen.

“It would have been nice to see the entire class distribution. It would’ve been nice if we could see this year’s enrollment list……”

Then a voice called out from the door, “Excuse me,” and Ayano came in with a tray full of sweets.

I watched as the sweets were placed on the table one by one. None of the sweets looked like anything I had ever seen before.

The sweets were in the shape of colorful flowers and fruits and were arranged on square plates.

“Wow, they’re beautiful! What kind of sweets are these?”

“These are called namagashi (raw sweets). They are made of sweet bean paste and glutinous rice. The processing method is a trade secret. And the processed bean paste is colored and shaped like flowers and fruits.”

(TL: I will include pictures and more description of this down below)

It was elegant, different from Findalia’s sweets. And they looked beautiful.

Unlike the dangos with bean paste, which Tojurou-san likes, these dangos were covered with a brown sauce.

“Oh? Is this the smell of soy sauce?”

Chris picked up a dango and brought it closer to her nose to check the smell.

“Bingo! To be exact, this sauce is made of sugar and soy sauce. You bake the dango with this sauce.”

I took a bite of the dango.

The dango in my mouth was glutinous from being baked crispy, and the sauce was sweet and spicy.

“The dangos with red bean paste on top are excellent, but these are also delicious.”

Chris gave me a big smile and her cheeks bulged into the shape of a dango.

“Oi! Bring me ten more of these dangos!”

The five dangos on our plates were gone in a flash.

While Chris and I ate one dango, Leon had eaten three.

“Leon, you ought to savor your food more.”

I slapped Leon’s hand as he tried to touch the raw pastry.

“I will take care of the namagashi.”

“It’s all you can eat. You can just ask again for more.”

At this rate, I’m sure he’s going to eat all the sweets he can get his hands on.

“Please refrain yourself a little!”

After that, the voracious Leon devoured ten raw sweets (the namagashi) and fifteen dangos.

I apologized and said I would pay for them, but the Yakumo’s politely refused. The five dangos on our plates were gone in a flash.

While Chris and I ate one dango, Leon had eaten three.

“Leon, you ought to savor your food more.

I slapped Leon’s hand as he tried to touch the raw pastry.

At this rate, I’m sure he’s going to eat all the sweets he can get his hands on.

After that, the voracious Leon devoured ten raw sweets and fifteen dangos.

I apologized and said I would pay for them, but the Yakumo’s politely refused.

They told him that they would come back again, so he decided to accept their offer for the time being.

They said that we should come back and visit them again, so I decided to just give it up for today. 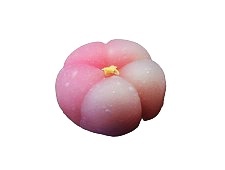 Namagashi (lit. raw sweets) are traditional Japanese sweets that are most often associated with wagashi. They are made of rice flour and a sweet bean paste filling, and are delicately shaped by hand to reflect the season. Namagashi are served at the tea ceremony.

Thank you to the friend who helped point out my mistake!