Why was my name of  my previous world written on that monument?

“Halt, are you alright?”

Luna didn’t know my previous name, so it was  impossible for her to say it.

— if my name wasn’t really written on that stone monument.

“Saijou Haruto-sama….Yes, Haruto-sama. The Hero-sama who captured this dungeon with me was also named as Haruto, which sounds like Halt — Eh, eh….?”

It seemed that Tina recalled her memories related to the name of the Guardian Hero.

Tina stepped towards the stone until she’s right beside it. Right now, she was probably calling the name of Haruto, the Guardian Hero.

She touched the stone monument —

At that instant, something came pouring in again in my mind. It was the memory of me touching the stone monument.

However, it was  a bit different from the one I saw earlier.

Tina was beside me.

My face was reflected on the polished black stone.

It was me from my previous world, before I reincarnated.

I was in a pure white world when I came back to my senses.

“Oh my, it seems that our contract ends here.”

I spun around towards the direction of the voice.

A peerless beauty stood there, and she was smiling tenderly.

“You are…The Goddess of Memories.”

I knew who she was.

“Fufufufu, it’s been a long while, Haruto.”

“It has been a long time…I apologize for breaking our contract.”

She and I were  bound with a contract.

“No, it’s totally fine. I received overflowing piety thanks to my contract with Haruto.”

There were three clauses in the contract I exchanged with the Goddess of Memories.

I would lose all my memories of this world.

All the inhabitants of this world would forget my name.

And all the [Sentiments] they had for me even though they forgot my name, would then transform into [Piety] to nourish the Goddess of Memories.

[Sentiments] included all the gratitude and love they felt for me. All the gratitude that the countries and townspeople felt towards me are converted to piety that would reach the Goddess of Memories,

As exchange for that, the compensation I received from the Goddess of Memories are —

The magical tool that would protect Tina, and a little time for me to be able to give it to her.

But, at that time, I needed that little time no matter what..

The contract with the Goddess of Memories was dissolved when Tina’s memories returned.

“The magical tool was already destroyed, and Tina got her memories back. But I’m already satisfied because of the piety that I have received.”

The Goddess of Memories beamed.

“I never thought that Haruto would return once again.”

Fragments of my memories regarding this world started to flow into my mind. I recalled the moment Goddess-sama and I formed the contract.

“Alright, I will now return the memories I took from Haruto.”

“Of course! I really enjoyed myself.”

Something soft touched my lips.

The translucent skin of Goddess-sama was right before my eyes —

This road was familiar, and I was walking on it.

— No, I’m not the one walking here. Nevertheless, my body moved forward on its own.

It was like I was sitting inside the cockpit of an automatic humanoid robot, and I was simultaneously viewing its field of vision with it.

I stopped at the intersection.

A car passed before me.

This was not the world where Tina and the others lived, but my previous world.

But, it didn’t mean that I returned to my previous world.

These were my memories.

My body moved forward without regard to my intention.

Yes, the park where I got involved in the Isekai God’s summoning was just up ahead.

I knew, but I couldn’t stop.

I reached the park. I passed through this park everyday on my way to and from my house and school. I was on my way home now.

Takato, Daichi, Yuri and Kana — those four would be summoned from here on by the Isekai God. Those guys attended the cram school beside my highschool, and they were students from other schools.

Also, we would be together for approximately a year, and they were the comrades that would defeat the Isekai’s Demon King together with me.

I passed by Takato and the others at the center of the park.

— At that instant, the ground under our feet started to glow.

It’s the summoning of the Isekai God.

I felt my body being pulled from somewhere. I was already used to teleporting, but it’s uncomfortable being forcefully pulled by somebody else.

I heard a faint voice that seemed like it would disappear any moment.

It was Tina’s voice.

Because I heard this voice, I managed to save Tina from the monster that attacked Tina.

Well, I didn’t get skills and status from Kami-sama so it gave me a lot of grief, but….

Hurry up and go save Tina!

It’s alright, Sarion would come to save her.

You just have  to buy some time!

He was  probably one of the big shots among the deities.

I got the feeling that he was  a lot stronger than the Evil God.

‘I’ requested Kami-sama to teleport me right away.

Yes. That was  okay.

Kami-sama was a bit flustered. The ‘me’ at that time didn’t notice it, but it seemed that I made a request that even Kami-sama would have difficulties with.

At any rate, ‘I’ got teleported to Isekai with a single skill and a Level 30 status.

It’s alright even if you’re weak.

T/N: I used Isekai (other world), Kami-sama (Deity), because Halt regained his memories of the Japanese Haruto here. 🙂

And here’s the light novel illustration for the Memory Goddess and Halt!! 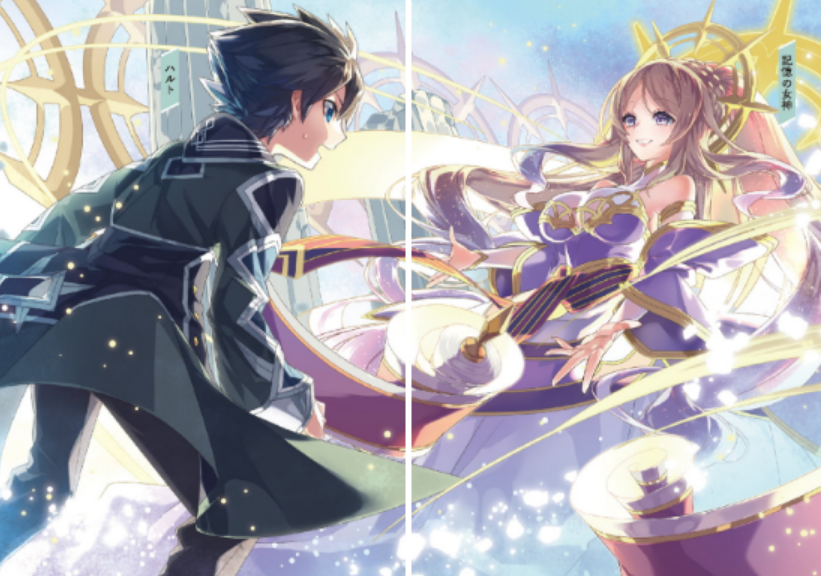 Hello! 😄 Thank you so much for sticking with us till here. 😁 I do hope you’re enjoying Level 1 – Strongest Sage as much as we enjoy working on it. 🤩 We finally launched our Patreon page; if you wish to support our translations and want to have earlier access to chapters (as low as $1 a month and you have 3 advanced chapters!), please feel free to check it out. 😍 You can also integrate your Patreon page to our discord channel to get your roles there! 😄 Here’s the instructions on how to do it, should you need it😄 Thank you so much, you guys! 😄

Also, your ratings and reviews at Novel Updates are very much welcome, and highly appreciated, too!😍 Please drop a review if you are enjoying what you read, that means a lot to us 🥰

Feel free to join our discord channel for release updates, interact with other readers, and more 😁

We’ll be truly grateful for your support. 🥰Thank you so much, as always!! 🤗🤩😁