T/N: Hello, Kyatkyat here!! Thank you so much for all the support to our works, we really appreciate it! 🙂 I would like to give a shoutout to the following:

for being our new patreon!! We’re so much grateful to each and everyone of you guys! Thank you 😊 And here’s our chapter for today, so please enjoy! 🤩😍

“Merdie, are you alright?”

We are desperately running away from the approaching flames. I’m a cat-form beastman, so my stamina isn’t that high.

I don’t like it when people say that I’m too similar to a cat, so I try not to add “meow” at the end of whatever I’m saying, but in an emergency, I can’t help this old habit.

“I’ll try to do something about the flames, so please run away, Merdie!”

I grabbed Leaffa’s arm and tried to pull her, but she won’t budge. Leaffa started to gather magic.

She cast a protective wind barrier, and somehow, the raging fire stopped coming towards us, but because the wind fanned it, the flames rose up higher.

“I’ll stay here and try to stop the fire. I already blew the whistle, so I think Professor Tina is on her way!”

“There’s no way you can stop an inferno like this, meow!!!”

“It’s all my fault, so I’ll try to do something about this. I need to protect Merdie no matter what!”

Th, this gal really has no intention of bowing down!!!

I karate-chopped Leaffa at the back of her neck so she’ll lose consciousness. The stunned Leaffa fell to the ground, so I used all my strength and carried her while running full speed.

“After all of this, you really have to treat me to eat-all-you-can cake, meowwwww!!!”

My physical limit has already been exceeded. I forcibly moved my body with magic. I know I won’t be able to move 2-3 days from now, so I didn’t want to do this, but now I can’t grumble about this, meow!!!

I continued running away with all my might from the intense raging fire that gained momentum due to Leaffa’s magic.

After running for a while, I finally saw someone.

“Mai, can you control that fire?”

“I can’t! Maybe that’s the fire knight we saw a while back. That flame doesn’t listen to my command at all! Mei, can’t you do something with water magic!?”

“It’s impossible! The whole forest is already on fire. You can’t extinguish that kind of flame unless you bring a Leviathan!”

Mai and Mei took the lead, and I continued to run as if I was chasing them.

After that, I ran for a few minutes.

I’m truly at the limit.

My mana is running out.

Is this the end?

── that’s what I thought… then…

Halt and his follower Youko was standing there.

“So, Leaffa fainted by the demon’s attack?”

“Ahh, is that so… Wait, Merdie, your ending word is just like a cat.”

“Ahhh, rather than spouting nonsense, let’s all escape, meow!!”

The fire finally reached us.

Is he out of his mind, meow?

The forest’s already in a blaze, meow!?

There’s no way he can extinguish this all by himself, meow!!

Halt extended his arm and started to release mana. He formed a magic circle with that.

“There’s no way beginner magic can quench that fire, meow!!!”

── I tried to shove it away, but there’s something strange with this… In the first place, beginner magic doesn’t need magic circles. That circle also looked odd.

Suddenly, a large amount of water overflowed from Halt’s magic circle. A gorgeous woman holding a trident appeared in the water.

“Just so so. Hmm, lately, I’ve been lonely because you didn’t summon me.”

Halt and Ms. Gorgeous were chatting. While they were at it, we were being surrounded by flames, but the water from the magic circle formed a dome around us and served as a barrier against the flames.

“E, excuse me… Are you perhaps the Water Spirit King, Undine?”

Mei tried to talk to the beauty.

“Oh, aren’t you Mai-sama and Mei-sama? How are you? How’s the human world? Did you find any potential contractors?”

The summoned beauty seems to be acquainted with Mai, Mei, and Halt.

“No, not yet… Pardon me, but do you have a contract with Halt?”

“That’s right. Ah, I know! If you haven’t decided on a contractor yet, why don’t you consider Halt?

“This one is a tough guy. He even had a good fight with the Sea God.”

“I really admire his strength, so I proposed a contract with him.”

“If you haven’t decided on a contractor yet, I recommend Halt. I’m sure your father will also be satisfied.”

“We..W, we will consider it carefully.”

I don’t really get it, but one thing’s sure ── Halt is strong.

The water from the circle suddenly moved away from the dome on its own and spread towards the burning trees. The fire was finally extinguished.

My fatigue was wiped out, and Leaffa’s consciousness was all restored by Halt earlier.

“No, I’m the one who should apologize, I did not keep my cool. Thank you for carrying me all the way here.”

“It’s great that both of you were safe. By the way, what kind of monster did you meet that caused the forest to catch fire?”

After we calmed down, Halt asked us.

Undine-sama brought the ball of fire trapped inside a water chamber.

Leaffa pointed to the mass of fire, which had the shape of a knight.

T/N: Leviathan is a creature with the form of a sea serpent from Jewish belief. Undine is a water-nymph from British Mythology who has a similar fate with the original Little Mermaid – doomed to die if love fails. She’s quite a popular character in games 🙂 Truly gorgeous. Images and definition ctto via Google 😉 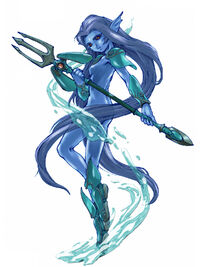 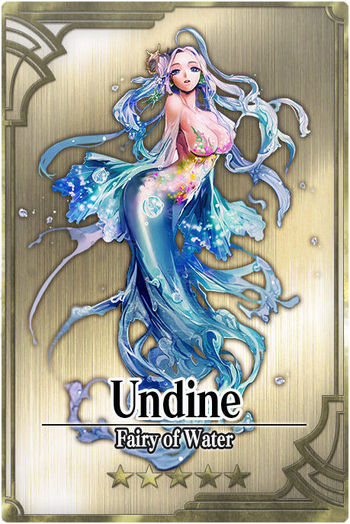 T/N: Hello! 😄 Thank you so much for sticking with us till here ☺️ I do hope you’re enjoying Level 1 – Strongest Sage as much as we enjoy working on it. 🤩 We finally launched our Patreon page; if you wish to support our translations and want to have earlier access to chapters, please feel free to check it out. 😍 We’ll be truly grateful for your support. 🥰Thank you so much, as always!! 🤗🤩😁